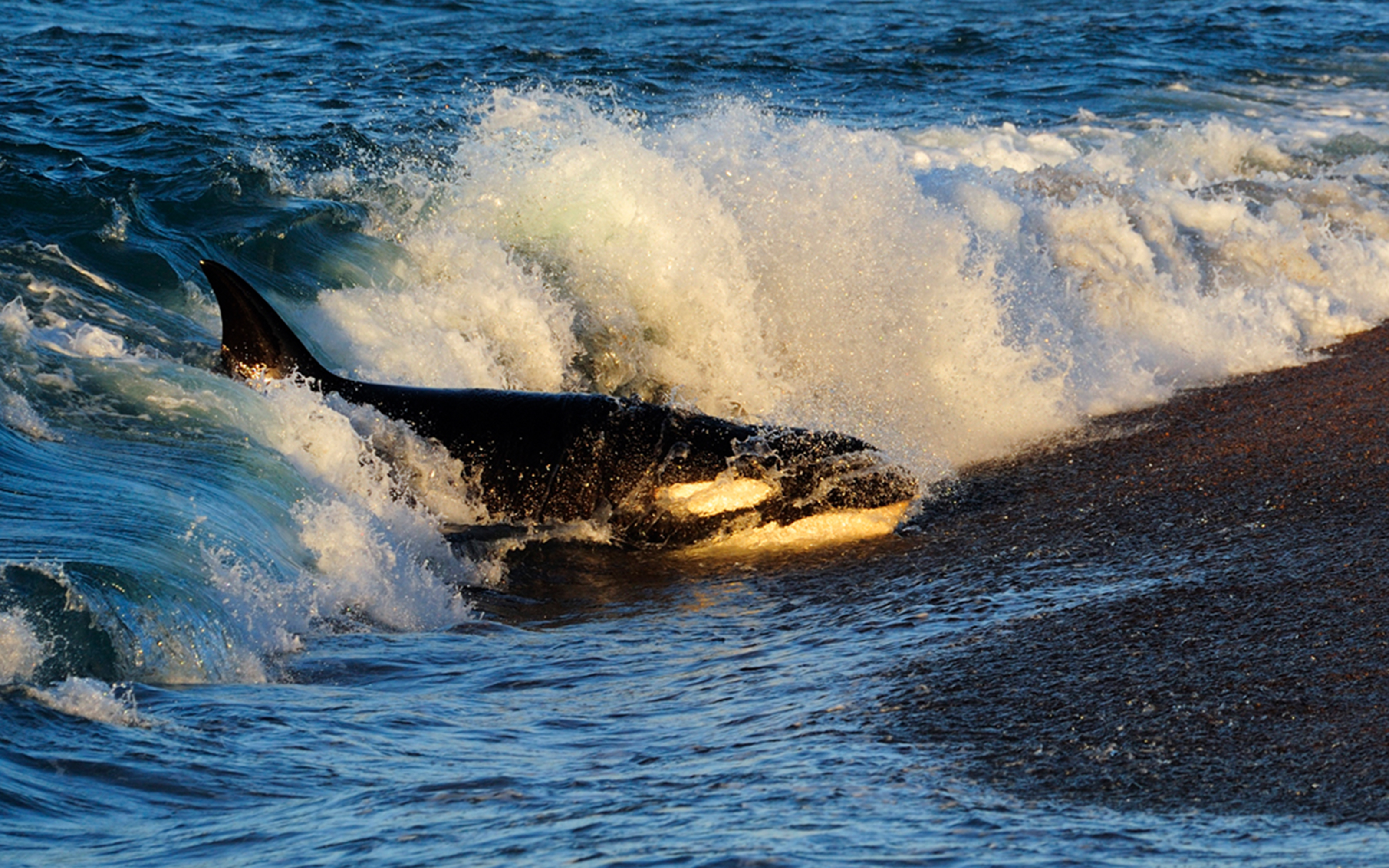 Orcas of the Península Valdés

Where We Are
The Frontera team is sitting on top of a sandy cliff under the rusty and neglected Punta Norte lighthouse. As the sun rises, the wind is blowing at 70 km/h and my eyes are filling with sand beneath my sunglasses. We’re looking across the Atlantic Ocean off the north end of the Valdes Peninsula in Argentina.  No one is talking because it’s impossible to hear in this wind. Three Southern Sea Lion colonies of mothers and pups are settled along the 8 km coastline below us. We’ve been waiting here for 8-10 hours a day for over 4 days. We’re cold and tired but remain hopeful that the infamous Orcas of the Valdes Peninsula will arrive at any moment. German watches the water as he holds a radio to his ear waiting to hear that the Orcas have been spotted and are headed our way.

The Spectacle
Nature can be heartless and the spectacle we’re waiting to witness is certainly no exception. Twenty-three Orcas, or Killer Whales, come to hunt sea lions here each year between February and April. This in itself is not unusual, what is unusual is how they do it. The Valdes Orcas are the only Orcas in the world that rush out of the sea, intentionally stranding themselves on the beach, in order to catch prey. Both the BBC and National Geographic have beautiful footage of this natural phenomenon, but we’ve come to see and photograph it for ourselves. It is extremely difficult to do.

The Hunter and the Hunted
The key to this amazing event is the baby sea lion. At this time of year, small “nurseries” of baby sea lions play in the shallow surf close to the shore. They’re very young, just learning how to swim and unaware of danger. Even their mothers are slow to warn and protect them as the Orcas begin the approach. Orcas may hunt alone or collaboratively. For example, one Orca will attack in plain view while another lays sideways in shallow water nearby (hiding its dorsal fin) waiting to ambush panicked pups. Once a pup is caught, it’s dragged from shore and shared with the entire group. Only ten of the twenty-three Orcas around Valdes hunt in this unique way; however, you can watch young Orcas being taught to do the same and the number of hunters is slowly increasing.

The Darker Side of the Story
Sometimes after catching a pup, the Orcas will play with it. They slap it around with their tails like a game of pup tennis before sharing it as a meal. As I mentioned before, nature can be heartless. For me, the most difficult part is watching the mothers look for their pups after a kill. They call and search the shoreline without rest. Despite the cruelty, watching Orcas work and play collaboratively is an amazing experience. In a strange way, you feel honored to be such an intimate witness. I suppose it’s hard to imagine for those who’ve not experienced it.

Why it Happens
No one really knows how or why the Valdes Orcas developed this intentional stranding technique. Perhaps they’ve been doing this for generations, perhaps not. Some people say it may have developed when humans were allowed to kill sea lions in Argentina. Thousands were killed until the mid twentieth century. Perhaps the Orcas were forced to find a new way to access their prey at this time, instead of abandoning a traditional hunting ground altogether.

Orcaholics
Orca groupies return each year hoping to be lucky enough to see the Orcas hunt for the first time or perhaps one more time. Most of these people are obsessive and have an amazing amount of patience. You can wait for days and never be lucky enough to see it. Last year, we waited 88 hours during 10 days before spending one beautiful sunset watching multiple attacks only meters away. This year we were fairly lucky and witnessed a few attacks from a distance on the very first day. Unfortunately, at the time of this writing, the Orcas have disappeared again. Here we are sitting under the lighthouse cold, anxious, and uncomfortable. So, my brain begins to wonder, why are we so crazy about these Orcas?

The Pilgrimage
This is our 3rd year coming to watch the Orcas hunt and we‘ve made many friends in those years. This year we’ve met people from France, Israel, Germany, Argentina, Italy, and the US. It’s an international migration: a worldwide pilgrimage taken by those who are inspired by the beauty, intelligence, and power of the Orcas.  If you’re lucky enough to see them hunt, teach, play, and communicate, you feel a connection to a community of animals behaving in very human ways. They exhibit both the best and the worst of human behavior, and it’s hauntingly familiar. Perhaps one difference between Orcas and humans is that we have the choice to avoid the worst, but they must survive and so instinct rules even as intelligence grows. I’m not completely sure why the Orcaholics suffer so much just to be here, but somehow it is truly addictive. I’m not a mother but maybe it’s like childbirth, the wonder of it all makes you forget the pain!

*Thank you to Nicolas Schuhler and Guillaume Blanchard for additional photos.